He’s handsome, reliable, and punctual—the perfect gentleman when you want him to be. But this dream man is Death’s best agent—and now he’s got more than his soul to lose…

One act of mercy before dying was all it took to turn soldier David Anderson into a reaper—an immortal who guides souls-of-untimely-death into the afterlife. But the closer he gets to atoning for his mortal sin and finally escaping merciless Fate, the more he feels his own humanity slipping away. Until he encounters Sarah Griffith. This skeptical scientist can’t be influenced by his powers—even though she has an unsuspected talent for sensing the dead. Her honesty and irreverent sense of humor reignite his reason for living—and a passion he can’t afford to feel. Now Fate has summoned David to make a devastating last harvest. And he’ll break every hellishly-strict netherworld rule to save Sarah…and gamble on a choice even an immortal can’t win.

“I hope to see more of what I hope will be a long running series. Highly recommended and 4.5/5 Stars.” ~ Douglas Weeks, Bitten By Romance

“Grave Intentions has great characters, a very entertaining story line and a good amount of action. I really enjoyed this story. I laughed, got choked up and sighed in appreciation…Lori Sjoberg definitely did a fantastic job making her characters relatable.” ~ Tome Tender

“It’s a great love story, and a great start to a new series.” ~ RomFan Reviews

She’s sexy-fierce, resourceful—and will do anything to protect victims as innocent as she once was. But this kick-ass reaper never bargained on meeting her not-quite-human match…or putting their very souls on the line.

A luxury Caribbean cruise is Ruby Dawson’s idea of hell even under the best circumstances.  Too many bad memories bubble up—especially of the wrenching injustice that made her a reaper. It doesn’t help that Jack Deverell is making this routine soul-collecting job twice as difficult with his devilish good looks and not-so-innocent questions. Now, as several unscheduled, unexplainable deaths throw passengers and crew into a panic, Jack becomes the prime suspect. The only way Ruby can save him is to challenge the decades-old curse threatening his soul. And as a malevolent unstoppable force turns their immortality into a fatal weakness, Ruby and Jack must risk their fragile humanity to save Fate’s delicate balance and their own unexpected destiny…

“A fun and satisfying read for fans of paranormal and supernatural romance.” ~ Library Journal

” If you like a paranormal storyline with a strong heroine who knows a thing or two about surviving, then Grave Destinations is the story for you.” ~ The Reading Cafe

“Part mystery, part romance, and all paranormal entertainment, Grave Destinations is a well-written tale with two amazing main characters, each hiding their own “true” selves, each fighting the attraction they feel for each other.” ~ Tome Tender

“I truly couldn’t put it down and when I reached the end, I sighed” ~ Kristol Hollis, Smart Girls Love SciFi

“If you can’t afford to go on a cruise this year – at least pick up this book and do a bit of supernatural murder mystery indulgence. Go on, you deserve it!” ~ Author Nicky Peacock

Handsome and haunted, he’s a reaper who prefers to work alone. But Fate has other plans for him and the sassy secret agent who shot him in another life—if their pasts don’t catch up with them first.

Dmitri Stavitsky has never played well with others—a Soviet KGB spy in life turned reaper after death, his work of bringing souls to the other side is best done alone. But orders from the top soon place him alongside fellow reaper Gwen Peterson, the American counterintelligence agent who took his life so many years ago. Now, as a ghost from Gwen’s past resurfaces with the power to steal reapers’ souls, the two have no choice but to set aside their differences and apprehend the rogue together. But their cross-country mission soon ignites feelings Dmitri thought he was no longer capable of—for the woman who helped destroy him. With an ancient force and a small army against them, he’ll have to let go of old grudges or risk his future with Gwen…as Fate hangs dangerously in the balance.

“A fantastic series that keeps getting better!” ~ Fresh Fiction

“If you are looking for a light paranormal romance that weaves in suspense this series is a lot of fun.” ~ Caffeinated Book Reviewer 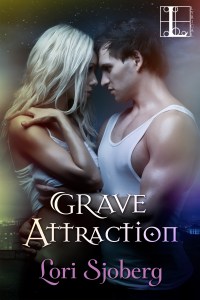 He’s a reaper who works by the book. But a sexy shifter will have him changing the course of fate just to be with her—if a killer doesn’t get to her first…

After four years as a reaper, helping souls cross into the afterlife is a job Adam Javorski has finally gotten used to. But when he arrives at the site of a serial killer’s latest victim, finding a living—not to mention gorgeous—hostage is the last thing he expects. The young woman captivates him in a way no one ever has—so much so, he breaks rule number one by helping her escape…

Marlena Walther doesn’t remember the man who rescued her. But when she sees Adam again, she recognizes him instantly as her soul mate. While the two work together to track down a killer determined to finish what he started, their undeniable attraction draws them even closer. Now Adam is the only one who can protect Marlena from a vengeful murderer—if he’s willing to sacrifice everything for her.

“GRAVE ATTRACTION pulls you in with excellent characters, new and exciting mythology, and a great dramatic finale.” ~ All Things Urban Fantasy

“The perfect mix of mystery, action, and romance.” ~ Books The Hook

“GRAVE ATTRACTION is a terrifically exciting read that should not be missed by paranormal romance fans!” ~ Fresh Fiction

“There’s so much to offer in this book- excellent story telling, good action, great suspense, and a steamy as all get out romance!” ~ Happy Tails and Tales

BOOK FIVE of the GRAVE SERIES

FTC disclosure: Lori Sjoberg is a participant in the Amazon Services LLC Associate Program, an affiliate advertising program designed to provide a means for sites to earn advertising fees by advertising and linking to amazon.com. Third parties, including Facebook, may use cookies, web beacons, and other technologies to collect or receive information from this website for measurement services and targeting ads. You can opt-out of collection and use of information in the US: http://www.aboutads.info/choices and EU http://www.youronlinechoices.eu/.